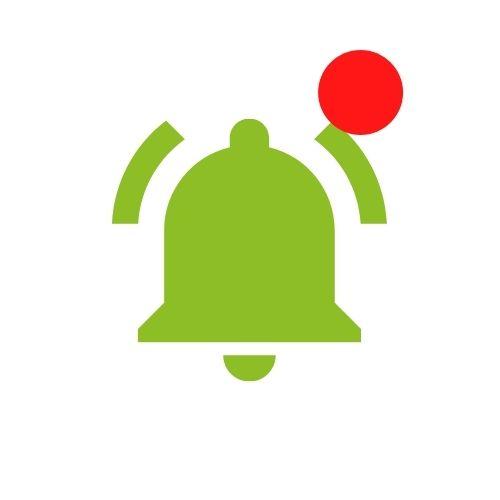 Many people think of SAP as an old-fashion company with a non-user-friendly product. Understandable, new technologies are advancing by leaps and bounds, and the appearance of SAP was looking more and more obsolete. It is easy to think that SAP was resting on its laurels while other companies were creating amazing products. However, the reality is that they were preparing their third big revolution: SAP HANA.

If you have a look to this webpage of SAP, as of today, they proclaim to have 440,000 customers in more than 180 countries, and 101,150 employees worldwide. In the link provided, it is stated that 77% of the world’s transaction revenue touches an SAP system. Those are big numbers for an “old-fashion” company. According to this document, their numbers are still growing. How is it possible that SAP continues to maintain this growth? If you check into their history, you will find that they were and still are really disruptive.

It’s interesting how the concept of “real-time” appears everywhere. Since SAP was founded, the goal has been achieving the real-time. In fact, the R in SAP R/1, SAP R/2 and SAP R/3 stands for Real-time. However, the meaning of this concept has evolved throughout the years. Let’s analyze in detail what I consider are the three big revolutionary products of SAP.

Dietmar Hopp, Hasso Plattner, Claus Wellenreuther, Klaus Tschira and Hans-Werner Hector founded SAP in 1972. They were five former employees of IBM that had the idea of creating a standard software that processes data in real-time. To put into context, the 1970s were still the era of the reel-to-reel tapes and punched cards.

Over the years, SAP R/1 evolved to include other new modules such as Assets Accounting. Finally, in 1979, SAP launched what it is considered their first ERP, SAP R/2. It supported and integrated major business functions in real time. Additionally it handled multi-country and multi-currency implementations. With the innovation of the direct connection to the database, the finance department, for instance, didn’t have to wait until the following day to update the material movements in accounting. Eliminating the need that the material movements were reported by people from the warehouse. Real-time processing was a big revolution. 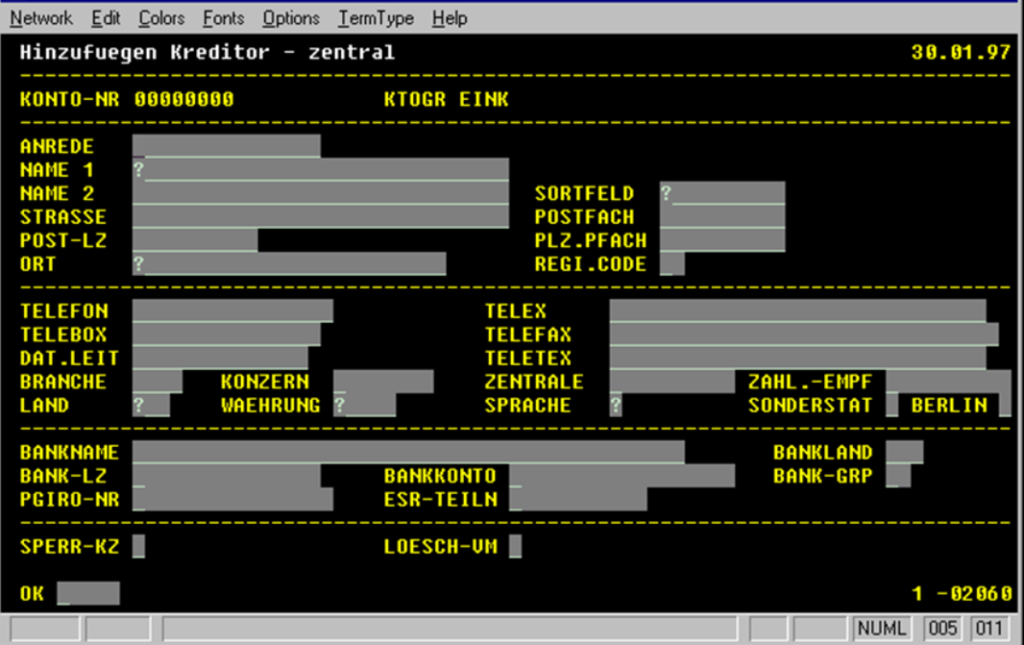 Launched in 1991, SAP R/3 was another revolutionary product. In fact, SAP R/3 was the product that shot SAP to stardom. The application was rewritten to exploit the power of a layered, three-tier architecture approach. You can read more details about the architecture of the SAP installation in this post. SAP R/2 customers were required to migrate to SAP R/3. This was not an update of the product, it was a whole new product.

Now let’s have a look to the innovations introduced with SAP R/3: 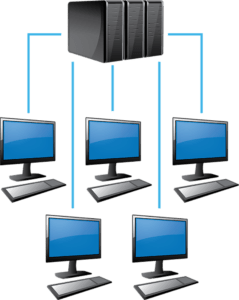 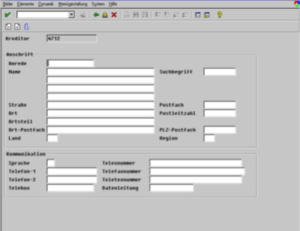 Image: Sample of one of the first versions of SAP R/3 screens

In 2004, SAP changed the name of SAP R/3 to SAP ECC (ERP Central Component) or SAP ERP. This was to integrate the product with their first Business Suite. In this Business Suite, SAP commercialized the ERP together with other products like CRM, SCM, etc. With SAP ECC, SAP also included web integration. However, SAP ECC cannot be considered a new product. It was more an enhanced version of the ERP. The innovation with ECC was that the ERP could now be integrated with other components through the help of SAP NetWeaver (I recommend you to take a look at this other post if NetWeaver doesn’t ring a bell). The code didn’t need to be rewritten and customers didn’t need a fully migrate. They only needed an upgrade.

The first release of SAP HANA was in early 2011. HANA stands for Hasso’s new architecture and High-Performance Analytic Appliance. Remember that Hasso Plattner is one of the founders of SAP, he is still in the business and he was leading the design of SAP HANA. He is the only one of the founders that is still a member of the Supervisory Board of SAP.

The context now for SAP HANA is that we are in the information age. Nowadays, we generate data from from computers, mobile devices such as phones, tablets, etc. In addition, with the growth of IoT (Internet of Things), information is being generated at an accelerated pace. 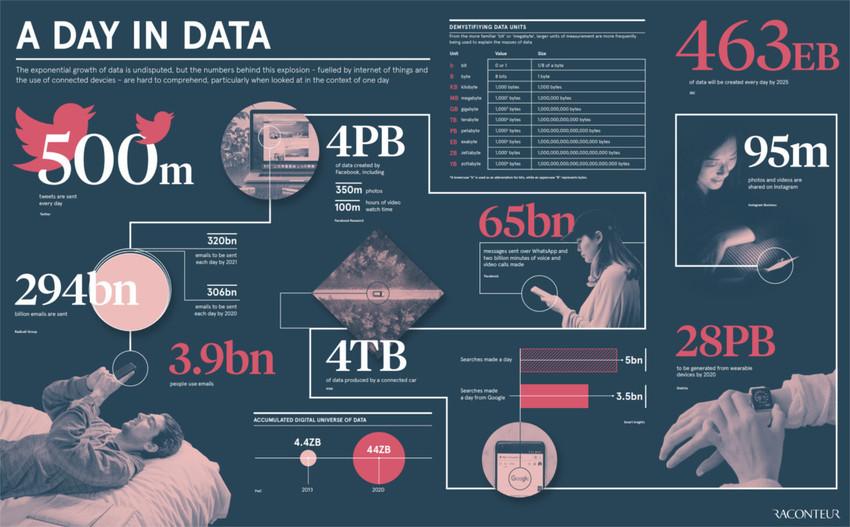 Image: Amount of data generated in a day Info graphic from 2019. Source: raconteur.net

A typical complain with SAP ERP is the performance in generating business critical reports. The challenge with SAP HANA was to provide capability to analyze and generate reporting information in real-time. This was achieved using in-memory technology. Essentially, the hard disk in the server is now used only for backup purposes and RAM is used as auxiliary memory. If you are interested to know how in-memory database works, I recommend you to read the chapter “The HANA platform” in this post of the SAP community (you have to scroll down a bit). In addition, SAP simplified the complexity of the database removing tables. With SAP HANA, data aggregation is achieved in the real-time, from any line item table without the need of aggregated tables. Indexes are rarely needed also with SAP HANA, they offer little improvement. Consequently, this reduced the data footprint. The reduction of the data footprint together with the in-memory technology result in a high performance database.

This was a significant benefit of SAP HANA and it made sense that SAP started rebuilding their products to run solely on HANA. The code has been adjusted to take advantage of some basic optimizations. This means that SAP is not restricted anymore by the limitations of the databases from other suppliers. SAP was finally able to provide a product that didn’t compromise on performance due to database limitations.

SAP S/4HANA was born in 2015 as the next evolution for SAP Core ERP. SAP S/4HANA stands for SAP Business Suite 4 SAP HANA. You can read more details about the technological advantages incorporated with SAP HANA in this post.

Before getting to S/4HANA, they before adapted their Business Suite, including SAP Core ERP to run on SAP HANA database. Subsequently they created the application SAP S/4HANA Finance to run natively on HANA. Finally, SAP included the rest of the modules of their Core ERP to deliver SAP S/4HANA.

SAP S/4HANA aims to enhance decision support with real-time information to the right people, at the right time, anywhere. Additionally, with SAP Leonardo, SAP is adopting new technologies such as machine learning and Data Intelligence. SAP is now able to make predictions and help the user to make the right decision. If you want to review the products that SAP have in the field of artificial intelligence, big data and machine learning, have a look to this other post. 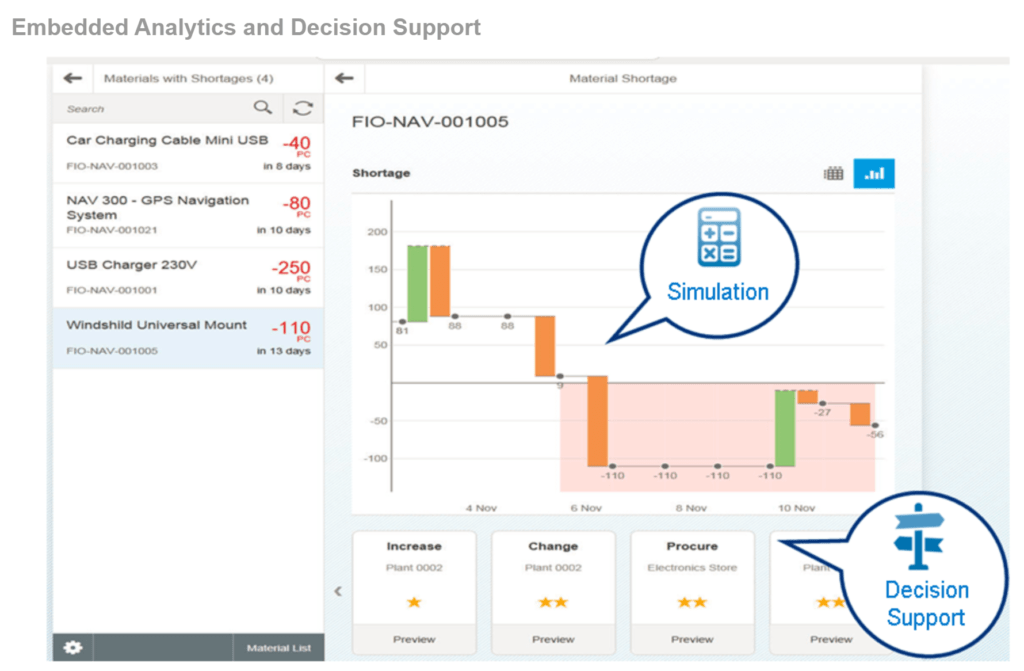 Just as in the 1990s SAP customers were required to migrate from SAP R/2 to SAP R/3, now they are required to migrate from SAP ECC to SAP S/4HANA. SAP will stop providing support for SAP ECC customers from 2027 (or 2030 for some exceptions). On the other hand, SAP made a commitment to provide maintenance for SAP S/4HANA until 2040. More details here.

I will soon publish another post about the latest innovative SAP products. Don’t forget to subscribe to be notified when this happens.

Cristina Gil Gallo
Cristina specializes in SAP SD consulting holding a certification in S/4 HANA Sales On Premise. She started her career in SAP in 2005. She is particularly interested in international projects. She holds a BSc in Industrial Engenieering from the Universidad Politécnica de Valencia.